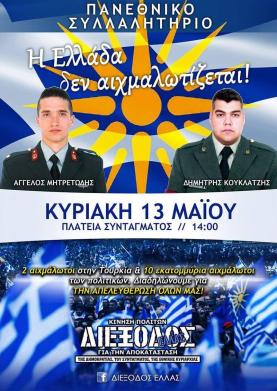 APPEAL TO THE GREEK PEOPLE

Today,April 13,2018 ,exactly one month before;a national demonstration having as slogan “Greece cannot be imprisoned” is being announced and will take place on Sunday,May 13, at Syntagma square.The time has arrived for our people to arise demanding  the immediate liberation of our two soldiers and the cessation of the biased negotiation concerning the selling out of Macedonia which may lead to the dismemberment of our country.Further demands concern the restoration of Democracy,that has been altered,in order to allow the adoption of the illegal memoranda and to change the NO vote of the referendum of July 5,2015.The Constitution has been violated and our national sovereignty has been illegally given away .Our country has been ruined financially and is at the mercy of  looting from our lenders and of unfriendly neighbors.Public property has been mortaged until 2099.

United we will demand the return of our country,free,democratic and independent with the Greeks becoming once more citizens and not only voters.They will decide,participate,control and manage the future of their life and that of their children.

The initiative,which was being prepared in the last months,was to have been announced yesterday,but Greece mourned the first victim of the war between Greece and Turkey.who was killed after preventing turkish planes from entering Greek airspace,Captain Giorgos Baltadoros.

The citizens of Greece thank and trust the Greek Armed forces but the time has come for the people to speak in a decisive way.Freedom is not given away,it is conquered.We shall not live as slaves and prisoners in our own country.and we shall not allow Greek blood to be shed in vain because of political purposes.We recognize as  emblem the Greek flag and with this in our hands and hearts we start our fight by activating and implementing article 120 of the Greek Constitution.

A detailed press release will be prepared during the week and press conferences will be given in all the big cities of Greece.The first one will be held symbolically in Mani,an area that remained always free like the Greek soul,that has no limits.

(If before May 13,our hostage soldiers are miraculously freed,the demonstration will take place as planned for the other national issues  and we hope that they can be with us.If however,the representatives of parliamentary fascism,bring the issue of the selling out of Macedonia earlier to parliament,an issue that has already been agreed upon by part of the political system and of foreign decision making centers,then we will meet in front of Parliament the same day in order to prevent the dismemberment of our country.)

Petition to the prosecutor of the ICC. About the situation in Greece, he have already received 4 appeals.

Petition:
As a citizen of the world, I support the legal battles of the Greek people and ask the Prosecutor of the International Criminal Court (ICC) to immediately activate procedures, to investigate the crimes being perpetrated in Greece and bring to trial anybody responsible for them. Any and all persons found guilty must be punished. Such crimes must be prevented.